Hope For Safety and Stability 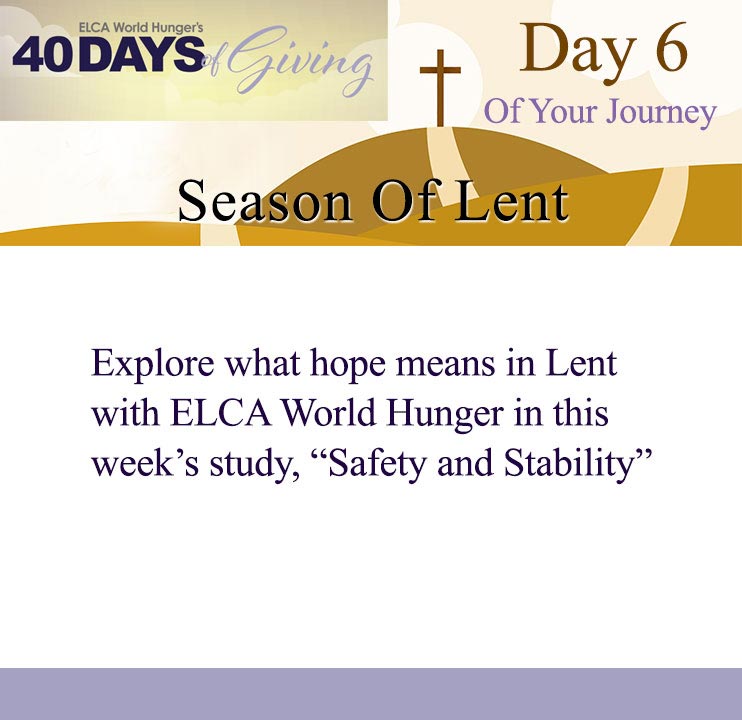 “You shall eat in plenty and be satisfied, and praise the name of the Lord your God, who has dealt wondrously with you. And my people shall never again be put to shame” (Joel 2:26).

“WHAT ARE YOU GIVING UP FOR LENT?” As the church begins the 40-day journey of the season, this question will be repeated in many a coffee-hour conversation. The question reflects some of the central themes of Lent: selfsacrifice, repentance and humility.

In Lent, the church enters into Jesus’ time of testing in the wilderness and the ancient Hebrews’ time of trial in the migration from Egypt to the promised land. It is an austere season of self-reflection on sin, death and fallibility. Sandwiched between the bright lights of Christmas and the glowing pastels of Easter, Lent is a somber reminder of the distance yet between the world as it is and the world as we know, by faith, that it one day will be.

That may be why it seems odd for this year’s 40 Days of Giving theme to be “Hope.” Even the lectionary readings to start this season offer little help in connecting to this theme. The Ash Wednesday reading from Joel illustrates this:

“Let all the inhabitants of the land tremble, for the day of the Lord is coming, it is near — a day of darkness and gloom, a day of clouds and thick darkness! Like blackness spread upon the mountains a great and powerful army comes; their like has never been from of old, nor will be again after them in ages to come” (Joel 2:1b-2).

As the author probably intended, the prophecy fosters a sense of urgency for repentance, and perhaps even terror, for the “day of the Lord.” But there is another side to this, even within the same chapter of the book of Joel. After all the dire warnings and unsettling forecasts, the prophet reassures the people of God that all is not lost: “You shall eat in plenty and be satisfied, and praise the name of the Lord your God, who has dealt wondrously with you. And my people shall never again be put to shame” (Joel 2:26).

Lent, certainly, is a season for reflection on temptation, sin and loss. But it is also a season for reflecting on hope. What else but God-given hope could have sustained the spirits of the ancient Hebrews wandering in the wilderness? What else but hope could have nourished Jesus’ resistance to temptation and comforted him on his march to the cross? The season is not merely about what we may give up but also what we may take on. Lent concerns both the past for which we repent and the future to which God is inviting us.

We journey with our ancestors and with Jesus through darkness, uncertainty and even death in Lent. But we journey in hope. Lent is more than a story of how far we have journeyed away from God; it is also a story of how far God has gone to draw near to us, even when the way seems unclear or threatening (as it did for the ancient Hebrews) or when hunger and isolation threaten to undo us (as with Jesus in the wilderness).

Early Christians understood the fasting of Lent as preparation for the hopeful celebration of Easter, but they also taught that the spiritual practices of Lent encouraged Christians to open their eyes to the world around them, particularly to the lives of neighbors who still today face uncertainty, vulnerability, hunger and isolation.

Manhal Mohamed knows about walking with hope through times of uncertainty. As director of housekeeping at Embassy Suites, Manhal is responsible for hiring and supervising other employees. His journey to this job in the Carolinas began more than 6,000 miles away, in his home country of Iraq. Manhal came to the U.S. as a refugee and was met by staff from Lutheran Services Carolinas (LSC). LSC was able to help Manhal secure housing and a job, but he knew starting over in a new country would not be easy. At first, he would come home from work and cry at night. But he kept working and hoping, and his determination paid off, first with a promotion to supervisor and later with a promotion to his current job. Now, he is able to support himself and provide employment for other LSC clients.

Despite the challenges of leaving Iraq, applying for status as a refugee and settling in a new country, Manhal’s hope has refused to flag: “I will never stop dreaming about my future,” he says. The hope for safety and stability drives people around the world to face the uncertainty and fear that accompany leaving home. Each refugee’s story is unique, but the stories often told by people fleeing their homes share common elements — threats of violence, lack of opportunities and social upheaval. Knowing this, the ELCA Churchwide Assembly in 2019 declared the ELCA to be a “sanctuary denomination,” offering support to neighbors around the world as they journey in hope to a brighter future.

To be a “sanctuary denomination” means that the ELCA will continue to accompany refugees, migrants and immigrants as they seek new opportunities for safety, stability and security. Being a “sanctuary” is about more than remembering the immigrant past of many ELCA members. It is also about journeying together with a shared hope to the future God has promised.

To be a “sanctuary” church is to be a community of Lent, a living reminder of God’s journey with us during times of uncertainty, hunger and isolation, in the past and in the present. The invitation to reflection for this Lent is not “What will you give up in repentance for your past?” but “What will you take on in hope for our future?”

In Lent, we confront even the darkest of times with Manhal’s bold assertion “I will never stop dreaming about my future.”

PRAYER Guiding God, you led the Hebrews out of Egypt and walked with them in their long journey from slavery to new life and freedom in the promised land. Walk with us in our times of uncertainty, fear and hunger, that we may walk with one another in hope. Bless our journey this Lent, that we may ever be open to your presence among us, and bless the work of Manhal and Lutheran Services Carolinas, that they may continue to welcome and accompany the neighbors in their midst. Amen.